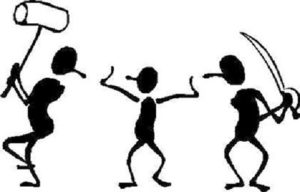 Notwithstanding your best efforts and those of other members within the community, conflict is bound to happen.  The key to resolving this conflict without the need for expensive attorneys or hateful battles is in how the conflict is addressed.

While trying to be neighborly within your community makes common sense, it is something that appears to have been lost in recent years.  By making friends with your neighbors or at least having a civil speaking relationship with them, you can avoid many of the spiteful battles that too often rage within communities across the United States.  When conflict arises, it should be dealt with in an adult and civilized manner.  Avoid the urge to “tattle” to the association and attempt to utilize the association to handle the situation for you.  Face the conflict head on with the tools described here to avoid making an already unpleasant situation worse.

Step One. Your first step should be to identify the conflict and its cause.  Animosity often begins as a small seed and will fester to a huge thorny tree if left unchecked.  Sit down and write out the issues that are causing you unrest.  Often putting the issue on paper will help you identify whether you are being overly sensitive or whether there is truly a problem.

Step Two. Once you have identified the problem or problems, write down as many possible solutions you believe to be possible.  Include everything from moving to ignoring the issue.  This part of the process is brainstorming and may lead you to think of ways to address the issue that you may not have believed possible.  It will further allow you to be prepared for ways to handle the third step.

Step Three. Once you have identified the problem and written down all of the possible solutions that you can think of, you must talk to the person who is causing you unrest.  Discussing the issue that is causing you concern does not have to be confrontational.  Put yourself in your neighbor’s shoes.  It is highly likely that while you have been boiling about the problem for weeks your neighbor has no idea about the issue.  Be civil and friendly.

We’ve all heard the old adage that you attract more flies with honey. Put that adage to good use and think about how you can accomplish what you would like to accomplish in a friendly manner.  If you are lucky, your neighbor will respond in a positive manner to your friendly conversation.  Your neighbor will be more likely to work with you to resolve the issue if you discuss it with them before “telling on them” or asking your association to do your bidding.

Let us take a common example – barking dogs.  Some people love dogs while others do not.  Barking annoys some while it makes others feel safe.  Let us assume for this example that you cannot stand the sound of barking dogs.  You have moved into a new community where your next door neighbor has two dogs.  These dogs bark often enough to cause you consternation.  This has been going on for months and every time the dogs bark, it angers you even further.  The issue has been rolling around in your head since you moved in and it is getting to the point where it is about to boil over.

There are a few different ways you can address the issue.  Normal human nature may take over and you might yell and scream at the dogs to stop barking and at your neighbors to keep their dogs in line.  You might even spray the dogs with water when they are barking or even when they are not.  This course of action will lead down a road which is not likely to lead to a positive resolution.  Both parties will further entrench in their positions and are more likely to go to court or the police over the principal of the matter.

Now let us assume that you want to try an alternate approach; an approach that might actually lead to a positive result for both you and your neighbor.  You sit down at your home office or kitchen table and write down all of the issues that are causing you unrest.  For example you might write down:

If left unchecked, these issues are likely to cause further and further anger every time they occur.  Once you have identified the issues that are really causing you concern, you should sit down and think of ways that the issues can be addressed.  This process might take a few days, so be patient!  You have lived with the situation for months so another few days working toward a positive solution should not prevent you from attempting to use the process described here.

A day or two have passed, and now you begin thinking of different ways to resolve the issue.  You sit down and write down the following:

You have now started the process of addressing the situation in a positive manner as opposed to letting it fester.  Some of the items on your list are feasible and others are not likely to lead to a positive resolution.  But now is not the time to think about whether any of the ideas will work.  You should set aside the list and come back to it in a couple of days to see if you have thought of any other possible ways to address the situation.

By now you have a good working list of ways to address the problem that has been causing you to lose sleep for months.  The next step is to discuss the issues with your neighbor.  Remember to be friendly!!  While it might drive you crazy to even consider the prospect, perhaps you can bring cookies over to your neighbor’s house and ask them if they have a bit of time to talk.  If they do not have time when you stop by, find out when would be a good time to talk about their dogs.  Let them know that you have had some concerns about the barking and that you want to talk to them about ways to address the barking so that both of you can live as happy neighbors.

Do not be discouraged if they do not have time for you when you first stop by.  You have identified the issue, given cookies as a token (or peace offering) and shown that you want to be a good neighbor.  Even if they do not talk to you that day, they will know of the issue and know that you want to work positively towards a solution.  It is possible that they will even start taking steps to address the situation by themselves.

After you have identified the issues ask your neighbor if you can work together to address them.  Allow your neighbor to think of possible solutions before you suggest any.  It is likely that they will come up with some of the options you wrote down when making your list of possible solutions.  It is also possible that they might come up with solutions you hadn’t even considered.  Using the list you created as a guide, you can also suggest other manners of addressing the issues.  The key is to work together as neighbors.

Put yourself in the shoes of your neighbor.  What if you owned a dog and had no idea that the barking (which you consider to be mild) was causing problems for your neighbors?  Would you rather receive a threatening letter from your neighbor, the association, the county or the city, or would you rather have your neighbor drop by with cookies and have a nice discussion about the issues?  Positive thinking and a little happiness goes a long way toward resolving things in a positive manner.  Are you ready to take the first step?

About 4 years ago from James M's Twitter via WordPress.com

About 4 years ago from James M's Twitter via WordPress.com